I can’t remember how everything started. Probably with a Beatles song playing on the radio. I was born in 53, as we said then, long before the year 2000. I grew up in Chef du Pont, a village in the marshes of Carentan, Cotentin, 4 km from Ste Mère Eglise, a small town immortalized by the 20th Century Fox  movie, '' The Longest Day ''.

Chef du Pont, of interest to us:  a church, 2 dairies, an andouille* factory (stench guaranteed), a train station, a grocery store, a hardware store, a girls’ school, a boys’ school, swamps, an open air dump overlooking a fetid pond near the railroad: the most attractive place in the village, by far!

*Chitling sausage. Note from the translator

This pond was one day graced by a raft that I had built with two or three friends, made of big gas-oil cans maintained by boards, navigating between the willows to observe (scare) moorhens . This is also where I prepared my first meal alone by stoning a poor sparrow using my sling and charring it on an Indian style brooch. Later, as a scout,  I would know all these "pleasures" on another scale ...

My interest in the hardware store moved up several notches when I found out that, on Mom’s insistence (she taught at the boys' school), I could order the record I had heard on the radio and receive it three weeks later …

I've never been as interested in pans and other kitchen accessories as I was during those three weeks.

When the album arrived: The Beatles’ Eight Days a Week 45 Odeon Soe 3764, I entered my galaxy never to leave it.

Dad was the director of the Boys’ School in Chef du Pont. Life at home was punctuated by school holidays. Catherine, François and I were each born two years apart, with me being  the eldest. During the holidays the boys' school was our exclusive territory... A unique feeling never to be had since. We could push the desks into a corner of Dad's class and set up the electric train circuit while listening to Ticket to Ride blasting on the Teppaz record player. The idea that we were privileged never occurred to me.

During the big void of July / August, the whole family went to "Sessions" in the four corners of France. The Sessions were eight-day seminars, sometimes longer, organized by the “Equipes enseignantes”, a left wing association created by some catholic teachers who tried to re-think teaching methods. On the way home we always took the opportunity to pay a three-week visit to Papa's parents at "La Vigerie", a property located a few kilometers from Bordeaux, where my grandmother worked as a janitor / housekeeper.  We were therefore away for quite some time. Our return to Chef du Pont invariably went like this: older students, unaware of our arrival, had taken advantage of the large, empty schoolyard to play football, a game formally forbidden by my father during the rest of the year. The unfortunate kids were caught red-handed. In no time, they would all clear out, hoping not to have been spotted …

The one place we never managed to tame was Dad's office, appropriately nicknamed “the bunker” by Vincent, my little brother, the youngest of the lineage who arrived late, 12 years after me. So this nickname came much later, in another house ...

The office in Chef du Pont smelled strongly of cold tobacco and taboo. Dad stuffed his pipe with  “blue tobacco”  that I would get at Madame Ledouit's grocery store, a hundred meters from the school. Taboo was everywhere: the safest bet was to touch nothing. We would feel at fault simply going through the office door. The desk was a square table made by my uncle Robert, a carpenter, one of my mother's brothers. It was crowded but rather tidy. Virtually all the furniture we had at Chef du Pont was Robert's work. Mom has always had a great sense of family. For us, the office / bunker has remained one of the stronger images associated with Dad's psychology.

One of Dad’s constants was his quick irritation when we did not understand quickly enough, as if his attention was exclusively reserved for his students.  One day, as I was clearing the table (exclusively a childrens’ task) I grabbed the meat dish and asked no one in particular: where goes?  Daddy, exasperated:  to the trash! With a determined step I headed for the garage. The maid caught me before it was too late.  Never say in Daddy’s presence that we had a maid at home, he would have glared at you. The correct word  was a housekeeper. The Lapouge’s do not take people’s dignity lightly.

I was going to forget: it was in Dad's office that I had my first and only sex education lesson. Papa (looking serious and uncomfortable): Jean, before you go (into sixth grade), don’t believe everything your classmates might tell you. Children are not born in cabbages, they are the product of the union of a man and a woman. End of lesson. Make do with that.

I requisitioned the Teppaz, and from now on it would be upstairs in my bedroom exclusiveley playing my first records. I also took up the transistor radio that my parents used at noon to listen to the BBC and English pirate radios (they were easy to tune into) in my bed, at night, under the covers and in the dark. The corner of the room where I slept was lined with photos of the Beatles, in double spreads, mostly taken from Paris Match magazine.  One exception: amid the Beatles would later appear a large poster of Julie Driscoll, first sign of my nascent puberty (60’s connoisseurs will appreciate …).

Listening to music is good, making music is better.

Mom bought her washing powder in round barrels. The washing machine had required the construction of a concrete screed to fix it to the ground while spin-drying! I still wonder how our clothes could withstand so much violence. The barrels were made of cardboard and did not like being dressed in white cloth to look like drums, they produced no sound, but on the picture the illusion was perfect.

The world I wanted to enter required credentials:  a band name was essential.  We quickly found it with the help of my little brother François: underwear being unfortunately strewn on the floor, the band became The Slipers**. Having been quickly anglicized to “The Sleepers”, the result of our brainstorm figured proudly on the cloth/barrel/bass drum. I will be the drummer. 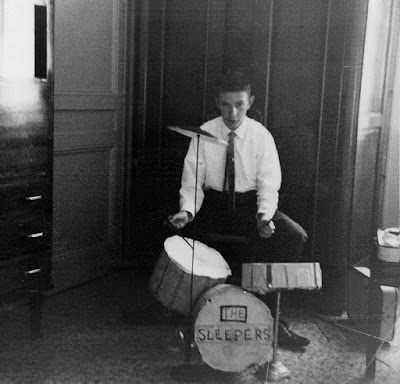