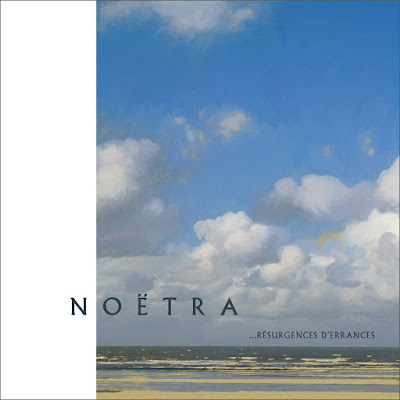 Wednesday, december 22, 2010.  Like every Wednesday, I'm in the train, off to give my lessons.  I know I'm going to go too far.  My schedule is full of holes.  Good thing, too.  I've been down for a while;  my back aches so much (the plague of many musicians) I can't even touch my guitar...  And it's getting to me.
I shouldn't complain, 2010 has been rather good to me (as those who follow me know) and next year looks promising, with two albums due for release in February.  But right now February is a long way off.  Yesterday I listened to Magma's Live Hhai again, which I bought recently on CD. Köhntark: I'd gladly give a few years of my life to write such a powerful piece!  The album was recorded in 1975.  Makes me think I should listen to those first Noëtra archives recordings from around 78. Never good for my spirits, listening to Noëtra. So that's my state of mind, traveling on that Wednesday train.
I go through my first lesson empty-headed, laboriously  picking through a Brassens song;  the lesson ends. Free slot. I know where that cassette is. Actually, there are two cassettes.  The first, that I know very well, is the one with the piece I had completely forgotten, recorded live in 1987 by a female admirer back when Christian and I played as a duet. The titles (her titles) are written in green. The piece I'm thinking of is called: “Gros Matou et le Papillon” (“Big Kitty and the Butterfly” - we don't share the same tastes, title-wise).  But that's not the cassette I want.  I want the black one, with CONCERT NOETRA 17 JUIN 1981 PART I written in big letters. I've never listened to it since. It has survived six house moves and a divorce.
The musicians tune up to a sort of buzz giving a hypothetical 'A'. Unprofessionally long. Oboe, violin, soprano sax;  what'll be the first track? Here it comes at last: Agréments Parfaitement Bleus II. It's tight, perfectly in tune, a shame the rhythm section is too far back, nice guitar (a tone I couldn't stand for years), superb solo instruments.  Dynamics swell for the finale, what are those noisy cracks!? Oh no!  It all comes back, but carry on, I'm experienced enough now to let them be.
Agréments Parfaitement Bleus : Epilogue. I remember: I had lengthened this short piece by writing an improvisational framework.  Let's see. Theme played by violin and cello.  What's that crappy cello tone!  And out of tune, too, and too loud. No luck. (The cello's performance will turn out to be my only musical regret on the recording). Pierre takes his chorus, flying high (This man burns, Kent Carter would say; he knows Pierre well). The supporting trombone line is brilliant. Gives me the shivers. Sens de l’Après Midi. I have a soft spot for this piece, the title is François'.  The playing takes my breath away. Beautiful!  Noëtra, the piece.  Fuzz bass, the sound of the album, it's all there.  Complete mastery.  I'm not sure my heart will take it.  The doorbell rings: right, next lesson!  A quick half hour of smiles to my seven year old student and I'm back to my cassette.
Neuf Songes. Serious business. All the more so because I had composed, for live concerts, the likeness of an introduction to replace the  album's sound effects (for there is an album, now). A rather ambitious intro, too. Hear: high, repetitive tuttis from the soprano recorder and clarinet, medium frequency responses from the violin and cello, bass support from the euphonium and trombone. Not bad, considering the difficulty.  The heart of the piece brings out the octet arrangements, for me to rediscover.  They work rather well. General improvisation leading up to the finale: how will we manage?  More and more dissonant tenutis from the violin and cello, feels like it's been rehearsed.  I'm drawing nice harmonics from my guitar (that's how I'd find a way out back then, when I didn't know what to do). Christian takes over, phew!  And how!  Only he can pull that off. The improvisation is over, into the finale we go, even the cello sounds good.  The finale, as always with Noëtra, is loud;  the noisy cracks are back.  Who gives a hoot.
Transparences. Three guitars: Christian, Claude and I. Sounds damn good, soprano sax and guitar (me) playing the theme in unisson: it's so beautiful I could cry;  as a matter of fact I break down in tears. Not just watery eyes like when I'm listening to Christian's solo in Long Métrage.  No, these are great unstoppable sobs.  I manage to listen to the whole piece. Stop. Dry my eyes. I can't stay like this. I call Christian Gerhards, he was at the concert: I can hardly leave a message on  his answering machine. I call Alain: same machine (my friends are very busy, they don't live in their past). Back to the cassette; the encore: Noëtra (the piece), as befits. Better than the first time, thunderous applause. Curtain. My cellphone rings. Alain. I'm safe.
PS: this cassette is a copy of the one I sent to the Ecm office in June 1981. It put an end to the Ecm – Noëtra relationship.
Jean Lapouge, December 23, 2010