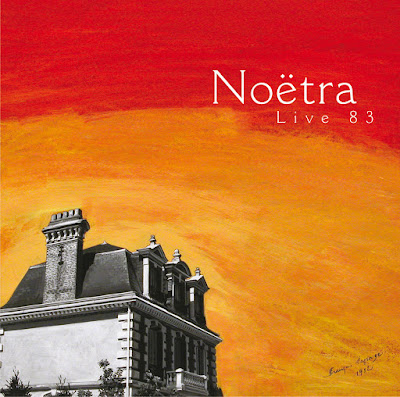 Captured live on French regional radio, this recording was the last bottle thrown to sea by Noëtra.  A quantum of equilibrium in extreme tension, it is the tip of an iceberg whose shape remains unimaginable for those ignorant of its development, an extraordinarily human adventure.

One October morning in 1979, between Périgueux and Bergerac, I impulsively (and a positive impulse it turned out to be) picked up a rain-drenched hitchhiker. The name of the thin “voyageur” was Christian Pabœuf.  He played oboe in a band, and promised me a cassette recording. The first track was not love at first sight; but a few listens later, Noëtra’s music seeped in and took root, entrancingly familiar.

We lived a few kilometres apart, and so I met Jean Lapouge and the other musicians.  See them on the booklet photos or on Jean’s website: a quartet of umbrageous Vikings, unflinchingly set on their shared passion. They were remarkably courteous and delicate, unconnected to the materialistic rudeness of the surrounding world. Far from the cliché of “brilliant” urban artists communicating through provocation, the musicians in Noëtra lived both in the heart of the Périgord countryside, and on a planet far removed from their neighbours’ everyday lives. They lived for the most part in small isolated houses, comfortless and phoneless, often carless;  but they had their instruments and a Revox…

At the village’s end, their rehearsal barn evoked a break in the space-time continuum.  In the midst of draughts and spider-webs, musical instruments and scores were gathered around a Revox A77. The musicians would work there, more concentrated and serious than a chamber orchestra. Rehearsal would set off after a trivial exchange of words: Denis Lefranc swaying to the rhythm, as if to accentuate the lyrical sound of his bass guitar; Daniel Renault bringing subtle and discreet refinements to his precise tempo; tense to the extreme, Christian Pabœuf would give off an intense emotional charge, a tightrope walker wavering between frailness and rigour. All this under the discreet control of Jean Lapouge, solidly concentrated on the intertwining arpeggios which structure his compositions.

At times Denis would be on vocals (Le Voyageur égaré…) or on euphonium, Christian on flute, and Daniel on violin (before Pierre Aubert’s arrival). This quartet was the heart of Noëtra, to which, according to the harmonic constructions imagined by Jean, other musicians would bring in the desired backup : saxophone, trombone, cello, violin… These occasional musicians, often far removed from the quartet’s universe and aspirations, were taken in by the ambient intensity: their playing was in phase with the band’s spirit, as can be heard on the two albums recorded in the barn.

This “contagiousness” sheds a light on the Noëtra story. For how can one explain that such broke musicians would relocate 500 kilometres away to join the original duet (Jean and Daniel) with not even the smallest financial perspective? It took only a musical cassette, a listen to one or two of Jean’s compositions, to bring Denis and Christian down from their native Normandy and Brittany. They rehearsed together for years, living off of expedients: private lessons, cover bands, street music… These “umbrageous vikings” were incredibly discreet and reserved.  For example, I only very recently became aware of the importance Jean gave to my feelings about his music: I was one of two people whose reactions he would await after each recording… Extremely demure, these musicians excelled in understatement, even among themselves. Why spoil with words the object of their passion, a creation above all other forms of communication? Jean’s music spoke for himself, taking part in it was the best possible response.

Jean sometimes says music can escape its creator, and that is a good thing. There the listener casts his fantasies, recognizing himself, rightly or wrongly.  More than any other, the music of Noëtra seems to me held equitably by the four elements: air, earth, water, fire. Its earthly energy can be airily light; it can burn and tear with no loss of fluidity. And it conceals a combination of power and melancholy: the powering desire for intense communication, the melancholy of not accomplishing it.

Spurred by the Revox and the new compositions Jean continuously calligraphed, the quartet had made good progress. Too imperfect for release, the first recordings’ energy was present, but often messy.  The mood was sometimes oppressive, dark and obsessive, close to what Art Zoyd or Univers Zéro were producing at the time. The equilibrium between elements was not yet achieved, earth and fire overpowering air and water. Progress allowed Christian to develop his improvisational capabilities, over as yet very written music.

Enter ECM. Another surreal gap: what a shock for an unknown, mostly self-taught band to receive, in the deep of Périgord, an invitation from the prestigious jazz label!  ECM seduced by a cassette sent by Jean!  Too good to be true?  Prior to meeting ECM, Jean endeavours to produce music both faithful to his ethic and in accordance with the label’s exactingness.  Boosted by enthusiasm, the musicians make progress, and so does Jean’s recording technique: a simple Revox in a barn yields near studio-quality sound…  The second cassette is musically and technically more accomplished, and although Manfred Eicher feels the magic of the first recording has been lost, the recording project seems to hold up.  Jean nevertheless senses he will have to convince and reassure ECM regarding the band’s capacity to record according to the label’s criteria. Despite the band’s progress, the project will get bogged down in all-around demotivation, for no specific reason.  Was ECM unwilling to take the risk of a slightly out-of-phase repertoire played by unknowns?  Did they sense Jean’s idealism, inspired by rock musicians’ recording freedom?

The early dreams and enthusiasm will yield to an accumulation of problems. Jean is at a psychological low; foreseeing the adventure’s end, he’ll push Noëtra to its limits.  Pierre being the last “extra” to still rehearse with the original members, it is in quintet form that the band will play live in the studios of Radio France in April 1983.

The resulting recording will be Noëtra’s swan song, its last burst of pride. The musicians have reached a new level of technique: Pierre enhances the quartet’s texture; he and Christian improvise brilliantly, supported by Daniel’s supple rhythm and Jean’s sublime arpeggiated work.

The end of the dream is more unbearable than was the pre-ECM anonymity. Noëtra will gradually die out, but the strongest will have gained much from the adventure.

What if ECM had produced Noëtra? That such a prestigious label should consider producing these unknowns says much about the quality of their music. Success or not, ECM or not, Jean would have followed his musical path. To him, Noëtra is part of the past; having emancipated himself from it, we can at last listen to what was reserved to a happy few, or to the archives of Radio France. And savour a rich and deep music, which will forever be intensely alive…

In 1983, under the brand name “Confluence”, Christian Gerhards designed his first high-end audio loudspeakers from his home in Creyssensac, Dordogne.
Confluence received (among other awards) the “Diapason d'Or” in 1989 and 1994.