The purchase of a good sound system, with my parents’ help, was a decisive step. We would even manage to reimburse them - well, almost.  The gear included a TEAC eight track mixer.  A marvel, a jewel.  I now had headroom, colour, everything one could dream of.

The new saxophonist / flutist Daniel had recruited improvised really well, we felt confident.  I would record drums, bass and guitar together on one track.  Daniel, Denis and I were extremely good at this game.  We had to anticipate nuance, structure, etc.  I noticed that I had to slightly overload the red light of  the tape recorder’s VU meters to give strength to the rhythm section in anticipation of bouncing tracks.  Go too far, we’d saturate the track…

Depending on the compositions I’d then overdub the other instruments on a second pass, the third pass being devoted to solos.  The biggest difficulty was mixing.  Once each pass was recorded, there was no going back.  Even the last instruments had to be mixed in real time.  All this with headphones set very loud to avoid being influenced by the direct sound of the instruments in the room.  Luck and a good dose of intuition were to become very important factors in the process.

When choosing tracks to record, the band always favored the most recent ones, but would sometimes wish to give a second chance to a badly recorded old piece, or one that had been reworked.

Printemps Noir is perhaps the best example. Composed in 73, it was quickly chosen to be recorded with the new Revox technique.  Hence, its prominent position on tape No. 1.  We had rehearsed it for a concert with Francis Michaud, the new saxophonist recruited by Daniel.  His personal interpretation of the themes, the energy and the jazzy ideas  he came up with on the simple bass line in  the central improvisation convinced us to re-record it.  The result was not up to our expectations, something was wrong in the overall sound which we couldn't put our finger on.  This version would later not be chosen for release...

Alpha du centaure and Venise, in fourth and sixth positions on the final track list, have a different story.  Freshly composed, their peculiarity was in using Christian's talent on the guitar.  He had bought a beautiful Gibson Les Paul sunburst which he was very proud of.  In concert he played the accompaniment parts exactly as we hear them on the tape.  I had recorded his comping parts as the framework for the Revox session.  Oboe-less, and very guitar-oriented, these two tracks may have more of a rock sound.

On Alpha du centaure we went a step further in sophistication.


I wanted a C note held all the way through the second part. On Daniel’s violin this C seemed very thin compared to what I heard in my head.  The idea of ​​playing successive layers of C’s with an overdriven guitar sound, à la Robert Fripp, was to give a much better result.   Pre-recorded and played back by another tape deck,  the pedal note was included in the last track bounce and voilà.

At this stage of our evolution, I felt we were on to something.  I had to find a way to make our music known.  There was no hope looking to regional government for help, our ignorance in local administration was abysmal.

That left us with what we thought of as our world, that of record companies and concerts.

Concerts.  I had seen quite a few.  Soft Machine in Caen in 72, Soft Machine, again, at the Bataclan in Paris with Magribe and Daniel in 73.
In Bordeaux, with Michel, I saw Henry Cow, McCoy Tyner, Chick Corea, Terje Rypdal, Soft Machine with Allan Holdsworth, Yochk'o Seffer, Magma, three times ...

Approaching Magma seemed appropriate. I had read here and there that Klaus Blasquiz was getting into producing.   A Magma concert in Limoges provided me with the opportunity to hand our favorite singer a cassette tape of  Reel #2.

As for record companies, I had an idea.  We could organize a trip to Paris using my uncle’s house (the Versailles station Head who lived in Fontenay Le Fleury), as a base.
Off we went, Marie Christine, Daniel and I, in our 2cv6.  I had picked up some addresses in the phone directory.  Famous ones, Barclay, CBS France etc.  We had made no appointments, as we had no phone at home!  As you can imagine, we didn’t even get past reception.  Fortunately I had taken care to note some less prestigious addresses.

At last a "record dealer-musician-producer" kindly received us in the back of his shop and listened to the tape with us.  He listened all the way through, and said: I can’t do much for you, but this music could be of interest to ECM!

Back home, our Parisian escapade had left us in a deep disarray.  The group was bogged down.  We rehearsed with no concerts in view.  Daniel, in particular, was becoming very critical of our operating method.

Klaus Blasquiz' answer to my tape, which I received in June 79, would change nothing ... for Daniel. 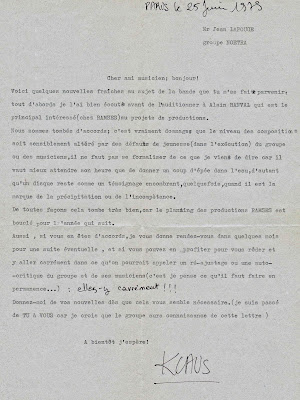 It would however give me some keys for moving forward.  The attentive reading of the letter comforted me in my role as a composer.  I knew my music was growing, my densely orchestrated scores getting increasingly complex.  To achieve this density I used the multi-instrumental talents of some of the musicians.  Daniel performed the violin parts. They were not on par with his drumming.  Ditto for Denis with his euphonium.  Christian’s recorders, on the other hand, were already very beautiful, and were an important part of the band’s sound.

In the future, every instrument must be beyond reproach. I began to plan what would become Reel #3.

Daniel tells me he wants to leave the band.  The scene takes place near the barn, where we  cut wood in winter for our stove.  He told me he was tired of rehearsing for nothing, which I understood.  I could not hold back my tears.  Daniel remained impassive.  I remembered his mother talking about her son and his toughness: Daniel; dry heart, didn’t even cry at his father’s funeral, dry heart!  I managed to make a deal with him.  Could he not wait until we finished Reel #3 before leaving?

My choice of orchestration for this tape was geared towards classical music instruments.  I was confident in the violin, clarinet and oboe working together, and thought that ‘cello and trombone would best complement the guitar's midrange base.
I wanted, without making any concession, to get closer to my idea of a chamber orchestra’s sound.  My ambition had no concern for the level of difficulty in playing this music.


The fact that Christian and Denis supported me in this process proved their faith in what we were doing - which amazes me today.  At the time I had not taken the measure of that faith.  So we began moving heaven and earth in search of the right musicians, those who would commit to complying with our requirements.

Recruiting Pierre Aubert on the violin was a great move for us all. An outstanding musician, Pierre has a great sense of dramaturgy in the development of his choruses. Having learned jazz with Didier Levallet, he is armed to play in difficult harmonic situations;  on this Reel, however, he was restricted to orchestral parts only.
His talent would burst and be very precious later on ...

Not unlike a film director, I had set everything up to perform a synopsis written in advance, the complexity of the scores requiring some rigor.  Technically I had found a trick that would give a professional touch to all the tracks. I plugged the spring reverb of my Fender Twin into the TEAC mixer.  The effect was striking!

This effect is highlighted in the sound effects at the beginning of Neuf Songes.  The violin / guitar loop had been recorded on the first track.  Our rehearsal room provided us with a catalog of noises: slamming the front door, moving an ashtray on the floor, all sorts of squeaking from mic stands, rustling paper near the mics, pounding on an old frying pan, and, as a climax, glass panes found on location, smashed by Denis.  Only one take for that one.

Generally, for this tape, we enrolled the musicians according to the planned overdubs.  Most often two by two, gaining in quality without increasing the risk of flubbing.  Everything went according to schedule.

The end of December 79 saw the final clap on Reel # 3.   I felt, listening to the result, that we had taken a great step forward.  Notwithstanding, Daniel would leave.

I was very much affected by Daniel's departure. Without him, it was as if the band no longer existed.
In addition, because of its sophistication, performing the music from Reel # 3 in anticipation of future concerts could now prove very difficult.  To be faithful to the arrangements, it would take at least seven musicians.  Only much later did I learn to reduce a score.  For now, we were at a dead end.

It is in this context that in February 1980 I received the letter  from Klaus Blasquiz, written with a red marker.  I had of course sent him the result of our work shortly before Christmas.  I cannot resist the pleasure of quoting him: Jean,
What a surprise ! Things are going as
in a dream; all my regrets
are dissipated and my hopes have come alive.
To be clear and precise without
going into details (which
concern you) I only have one thing
to say: what a surprise!
As far as I'm concerned, I’ve only to
wrap up all current productions
and if you are still ok
I will contact you in a few months to
get a record on track.  In the meantime,
please let me know if you get
professional leads elsewhere.
See you soon
KLAUS