When the answer arrived I was very happy but not really surprised. In this moment of euphoria I even had a reaction that I now regret, and that would cost us dearly; why not reach higher? Remembering the suggestion of the musician / producer who had listened to our second tape, I mentally began to prepare a shipment to ECM.  ECM – for me, the ultimate consecration.

I had a good deck for making a cassette copy, and the beautiful group photo taken by François in our barn, the one where we see the band in full rehearsal.  The introductory letter was written in good English by an English teacher, a relation of Christian’s or Denis', I can’t remember... Everything was quite professional.

After tape n ° 3 our musical life had come to a standstill.  Daniel had left us, and rehearsing as a trio did not make much sense.  I took advantage of this free time to compose,  luckily ideas flowed ...

The dance gigs also kept on, differently.  Daniel and I had lived through that first band’s decay, from its litany of innuendo to its inevitable end.  We were not loathe to leave the rotten J7, nicknamed "the livestock truck" for good reason.

The J7 had been lengthened and divided into three parts: the driving cabin (three seats), the gear platform in the back, the musicians’ quarters (five seats) in the middle. This module had the advantage of converting into berths for the drive home when we played away.  There was only one drawback: you couldn’t be claustrophobic.   Through the open side door, two musicians (often Daniel and I) had to crawl onto a slab of foam. Then an MDF board slid into place over them, allowing another layer of foam to accommodate the remaining musicians.  With the side door closed, no one could move!  One beautiful winter morning, as I tried to contort myself out of ‘bed’, I encountered resistance: my hair was stuck by the frost against the wall of the truck.

With the next orchestra things were more comfortable.  It had a better reputation too.  I was rising in rank.  The musicians were better.  I took the opportunity to upgrade my gear and bought my Fender Twin Reverb, the legendary guitar amp of reference.

In my new orchestra there were two singers, of course: Siegfried, the “French” singer, from Bordeaux, very funny, a Michel Polnareff specialist, his hit number was Lettre à France. Pat, the “English” singer, Parisian, curly-haired, long-limbed, specialty : Paul McCartney, sang Wings hits and some Beatles tunes that I loved to play, including Drive my car. These two could practically sing everything.  In their version of Elton John and Kiki Dee’s Don’t Go Breaking My Heart (Siegfried did Kiki Dee’s part because he sang so high), they were incomparable.  The orchestra had a good local reputation.

Later, Pat would bring in "his" bassist from Paris, who later became my best friend before committing suicide in '91.  Our long eclectic conversations in the truck had the knack of annoying our star singer and making him jealous.

In ‘79 Pat went to try his luck in Belgium where he had found a disco producer ready to invest in him.  In ‘81, we learned, like everyone else, that "our" Pat had become Patrick Hernandez, a disco singer - of worldwide renown this time, thanks to his hit Born to Be Alive. 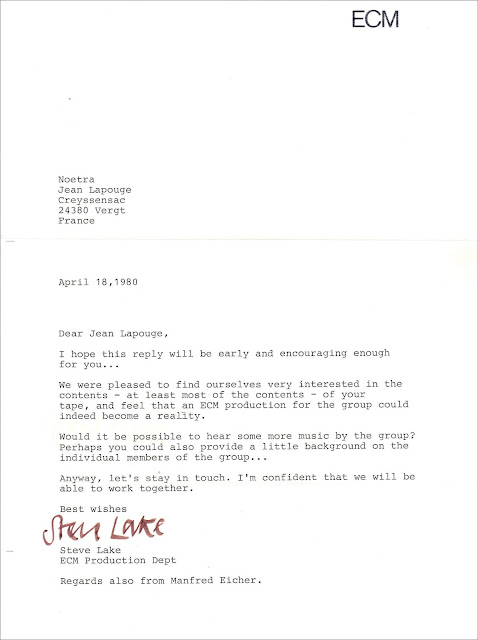 As I read it a sense of pride invaded me, as did a feeling of fear ...
How can I explain the situation?  Their catalog was really very impressive, very much focused on jazz, too jazz-focused for us.  In the French press Manfred Eicher had the reputation of being a cold interventionist monster: what would become of my songs?Would they be subjected to the ECM grinder?  No, I shall resist …

In my mind everything was confused, complicated.  I delayed answering.  Another letter arrived, more insistent, forcing me into action. 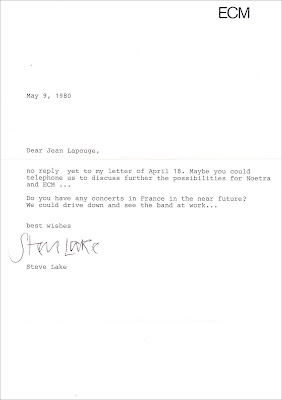 First, get an answer to ECM.  Quickly.  We can’t miss out on such an opportunity.
Make an appointment by phone.  Easier said than done.

Fortunately, I have a bit of history with English. I like the language, I was average in high school, not bad (12/20 on my final oral exam).  I had been to England twice, the first time at the end of sixth grade thanks to a Valognes / Bournemouth exchange .  I stayed in contact with Tom, my correspondent, for a long time, so my parents offered me a second trip during the Christmas holidays of my junior year.  I had to take the ferry in Le Havre. My parents invited Tom to spend a fortnight in France during the following holidays.

On my return, on the misty quays of Le Havre, I was approached by a traveller-type individual; he asked me to help him because he was a little short on cash to get home. I recognized him a year later: it was Magribe, unforgettable.

So here I was in front of a telephone booth at the post office in Vergt, my county town, waiting my turn for the most important call of my life as a musician ...

The appointment was slated for June.  It gave me little time to prepare more songs, which the label had insisted on.  I wanted to go all out.

Emphasizing the chamber music side seemed like a good option.  François particularly liked this aspect of my work.  I had begun to work on an arrangement of the six-piece sequence Périodes Ultérieures, Périodes Antérieures, composed at Vendeuvre du Poitou and renamed Périodes I, II, III, IV, V, VI: an austere title for serious music.  Instrumentation: classical guitar, oboe, violin, viola and cello. 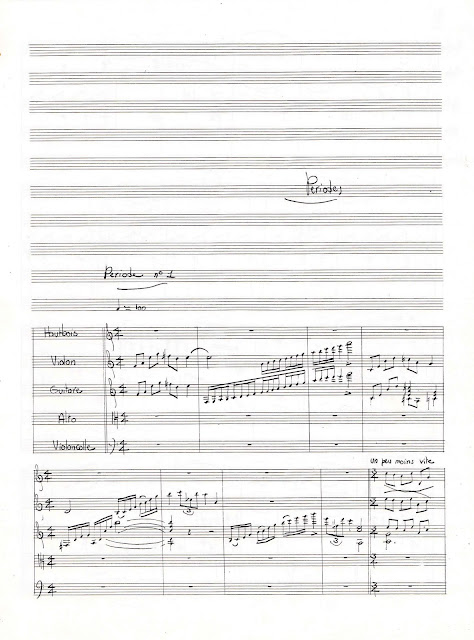 I decided to record this suite in the living room of our house, where I actually worked every day.  It seemed to me that the acoustics would be more conducive to chamber music.  True to the two by two technique, I recorded the guitar and oboe together on the first track.  The violin, viola and cello would be added later.

The other tracks on Tape 4 would be recorded in the same way as those on Tape 3.

The tape was finished just in time for the appointment, with a feeling of duty well done.  I got very good feedback from the musicians themselves, and especially from François, who considered this tape to be my best work yet.

And now, to honor the rendez-vous.