I was in Gräfelfing, in the suburbs of Munich, before an office door with the three little silver letters, at ten o'clock in the morning, right on time.  A secretary ushers me in, coffee, tea? They welcomed me warmly.  I was in a small business office with nice and caring people.

Just a few intimidating details:  the prestigious names of Keith Jarrett, Chick Corea, Jack Dejohnette, Dave Holland... labeled on files stored on shelves and, especially, a few record sleeves of LPs in progress, trailing prominently on the carpet (Pat Metheny 80/81, RalphTowner Solstice sound and Shadows ...) indicated that we were in the office of a record company - and not just any record company.  From the office windows you could see an Eight-lane highway to the left, heading south; and to the right a large field bordering a forest of tall fir trees that reminded one of the visual aesthetics of the beginnings of the label: the contrast was striking.

There was the english language problem but Manfred Eicher's assistant, Hans Wendl, spoke French and helped me a lot.  As a preamble they told me that we were the first French group to be contacted by them and that France was the most important country in terms of sales, after Germany of course; then I got a lot of questions from Eicher:
- Was I in contact with other record companies,
- How was ECM perceived in France,
- My relationship with the Parisian music scene... that he did not seem to like so much; and then more personal questions:
- My musical tastes in general,
- What I thought of Keith Jarrett,
- My Steve Reich influence (I did not know him!) etc.

At no time did I feel out of place. They told me they wanted to open up to other musical styles, including rock.  I took the opportunity to get the new tape out of my bag, which was immediately put onto the Revox and listened to religiously.

First piece: À Prétendre S’en Détacher:
Eicher: beautiful piece, small cross in front of the title.
Next two tracks.  No cross.
Noëtra, the piece:
Eicher: strong piece, very good piece, ... the end, I'm not sure! Small cross anyway in front of the title.
Périodes: we listen for ten seconds and Eicher suddenly stops the magneto: too french!
This guy is really unpredictable!

I tell him that I have the reel of the previous tape that I had sent them on cassette. He immediately asks his assistant to make a copy of it, rushes to the Revox, installs the reel himself and begins a monologue with the music.  Impressive.  The Voyageur's trombone glissandos snatched a smile from him. When my overdubbed harmonics appeared in the intro to Soir et Basalte, I got a compliment: very professional!

The climax was reached with Neuf Songes. He was captivated by the sound effects in the introduction, he jumped at each new sound, asking me details on how they were achieved.  He must have listened to the song many times, as he knew the structure - which, by the way, he wanted to change (we can do a lot of things in the studio!) He wanted more repetitive patterns “à la Steve Reich” at the beginning etc.

In the end almost all the tracks, except one, found favor in his eyes.  I can still see the little crosses on the back of the magnetic tape’s cardboard box.  On the last piece, Résurgence d’Errance, I confessed that the theme reminds me of Oregon. "Yes Oregon are good but they’re almost too clean ..." How do you want to keep your feet on the ground after that!

He tells me that the recording session should take place in October or November in Ludwigsburg, near Stuttgart, in the famous studio of sound engineer Martin Wieland, well known to fans of the label.

End of the interview.

It was one o'clock in the afternoon, Hans, the assistant, took me to a restaurant / pizzeria not far from the office that seemed to be the ECM canteen because we found some of the staff there; Steve Lake, in particular, who had stayed quiet during the interview and who now took an interest in me in a more casual manner.  I knew he was English and pressed him with questions about Soft Machine, who he knew very well, having been a “Melody Maker” music critic during the most interesting period of their career.

Manfred Eicher came in for coffee, didn’t order one, absent, in his thoughts...
Back to Gräfelfing station with Hans, who gave me two records lying in his car: Sam Rivers Contrasts and Kenny Wheeler Around Six. 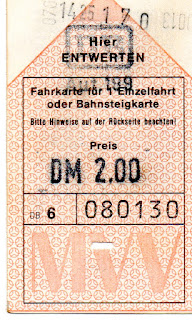 On the station platform, while waiting for the Gräfelfing / Munich shuttle, I experienced a moment of extreme depth and serenity.  It was very hot; I had a strange feeling, as if I had reached the end of something rather than the beginning of something: I could die.  Whatever happened next, nothing could take away this experience.

Back in France, I phoned Granville and dad picked up the receiver.
I tell him that ECM is the equivalent of Gallimard for jazz musicians around the world!
The Lapouge’s express their feelings quietly.

I had no trouble gathering the musicians again after the interview with Manfred Eicher.  Daniel pretended he had never left the group.

The ECM affair was making its way around.  I received a visit from Maurice Fari aka "Momo", with whom I had played in my last dance band but who was mainly the drummer for Xalph, the well-known band from Bordeaux; he came to find out for himself if all this was really true... I imagine that the musical Bordeaux Who’s who was in turmoil.
Comical situations were arising from all this.

Jean Marc invited me to his house, as usual, but this time Philippe Cauvin was there, guitarist for the band Uppsala, also from Bordeaux - he came to ask me for ECM’s address and phone number: if Noëtra had managed to interest ECM, then they, Uppsala would be taken right away…

Even in my own ranks some musicians from the outer circle were circumspect.  Pascal Leberre, our clarinetist, had to wait until I got my personal phone line to hear Hans Wendl's voice in my earpiece.

I came back from Munich quite disturbed.

I had very few musical indications from Manfred Eicher, except for the repetitive patterns for Neuf Songes that I quickly wrote and recorded.  My recording process was getting to be very good. There was no reason for me to change.  I now recorded the songs as they came.

Playing live was our Achilles heel!  I knew that the standard for them was to record an album in two days and mix it in one!  I had read this several times in jazz magazines, from ECM artist interviews.  That is already quite difficult for a regular band, so imagine what it could be for an inexistent one...  I still have nightmares!  Despite all this, we started to plan rehearsals to build our repertoire.  We didn’t do too bad.  I regained confidence. 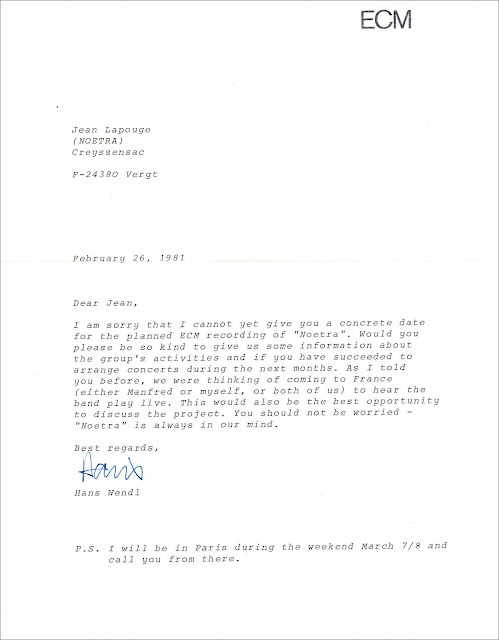 Noëtra was now a group of eight musicians, pure madness: guitar, oboe / recorder, violin, clarinet / saxophone, cello, trombone / guitar, bass and drums. The rehearsals became an organizational puzzle, and we could not pay outside musicians, only host them.  We needed concerts, urgently!  But eight-piece bands don’t find concerts at the snap of a finger.

Since I now had a telephone at home I asked Hans for bookers’ addresses in Paris. He gave me the phone number of their Parisian contact, Martin Messonier, who was about to leave them to take care of Fela's career.  Obviously this guy did not help me at all.
Once again we would have to do everything ourselves.  Find the concert venue, organize everything and hope that there will be enough of an audience to cover the costs...

In the meantime I recorded some tracks - not the worst in my opinion: Sens de l’après midi, Tintamarre, without Daniel, to see ... and Transparences.

Sens de l’Après Midi highlighted Pascal Leberre’s playing in the great concertante clarinet part underlying the whole piece;  thanks to track bouncing, we also had his soprano saxophone on the bridge and the finale.

Tintamarre had an ambitious score: trumpet, trombone and tenor saxophone. The re-recording technique, once again, allowed Pascal to move from tenor saxophone to soprano saxophone for the central improvisation.

I had a hard time accepting Tintamarre. I thought we were too much under the influence of John McLaughlin.  I remembered very well what Manfred Eicher had said when I cited McLaughlin as a major influence; he did not like Mahavishnu Orchestra’s jazz rock at all. So I did not dare send this piece to the ECM headquarters.

As for Sens de l’Après Midi and Transparences, they were never acknowledged.

On a voting day at the town hall of Creyssensac, Marie Christine and I had met a couple of music lovers and audiophiles living not far from home. Christian and Corinne Gerhards would soon become friends.  They had a high-end hi-fi system.  I used to go to their place to show them our latest recordings; listening to our work on their system allowed me to check the quality of our recording chops.  Their LP and cassette collection was huge. Christian turned me on to two records that were to become important in my musical development, Tales of Another by Gary Peacock and Changes by Keith Jarrett.  He would also write the beautiful liner notes for the Noëtra "Live 83" CD, released in 2010.

Finally I managed to organize a concert in view of recording it and sending it to Munich.
They found the tape not good at all, and were very disappointed.  The dream ended abruptly.

Fortunately, before the collapse, I had the energy to program the recording of Printemps Noir and Qui Est Il Qui Parle Ainsi? III;  tracks that represent the culmination of the recording technique I had developed with my good old Revox!

Printemps Noir was once more rejuvenated with new arrangements, including Pierre on the violin playing the first voice and, especially, a great first take solo by Jacques Nobili, a trombonist from La Rochelle’s "free jazz" scene, recommended by Pierre.

I sent ECM this session before the fatal cassette tape.  When I phoned them to ask what they thought of it, Hans said they thought it beared too much of a resemblance to Robert Wyatt.  Which, for some people, could have been a compliment - but certainly not at ECM, the most uncompromising of record companies.

The summer of '81 was really rotten, cold and rainy.
I felt helpless.

At the beginning of '82, I received a phone call from Vincent, my little brother, who was devastated: Weber had stolen the noises from Neuf Songes!  A big Eberhard Weber fan, he had just bought his last record, Little Movements.  Indeed, on the title track, over a repetitive piano loop, there are sound effects that sound just like those on Neuf Songes.

Sure, they are just sound effects, but still, Manfred Eicher had held out only a month before doing it: my interview was in June ‘80, Weber's recording is dated July ‘80, our own recording session had been planned for November.