During my second last year of high school, I didn’t get much news from Daniel, enough however to learn that he had quit studying and was making a living with music (?), with help from a friend living in Saint Lô, who he had met in class.  Magribe, his friend, had found him a very cheap farmhouse to rent, right next to his own house.

Daniel was not one to do things by halves.  He and I had unfinished business together, and our story was to resume at ’’ La Vache Brune’’.

A small locality on the edge of St Samson de Bonfossé, near Saint Lô, “La Vache Brune” housed a small farmhouse at the end of a dirt road. No running water, just a well five meters from the house, no heating either, just a smoke-blackened chimney.

One room on the ground floor, two rooms upstairs. A bit of furniture provided by Magribe: two Citroën DS seats for a lounger, a table, knocked together with a tree trunk slab and three feet, two or three chairs, and an old gas oven. Upstairs, a matress on the floor of the first bedroom, the Pearl double drum set in the second.

All I want now is to join Daniel at ‘’ La Vache Brune’’. I had an ally in Mom. Had she convinced daddy that a danceband musician’s life was a sustainable one?  The fact remains that I moved to Daniel's farm in July 72, with François, who would spend his summer vacation there. 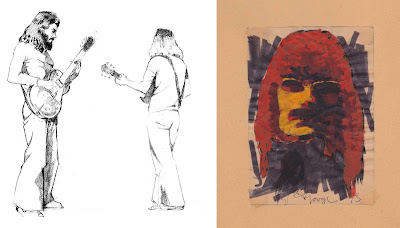 I'll get into the habit of hitching a ride back to my parents’ every other week with my laundry, my sweaters having suffered from my first washing attempts.  I had tried to wash my best sweater, which I thought gave me a bit of a Mike Ratledge look, by soaking it in boiling water: when I put it back on I looked more like an accordion.  I also kept up the lessons with Mrs Hammel.  Dad would drive me back to St Samson in his GS.  Daddy always was a Citroën man.

There were now several mattresses on the floor in Daniel's bedroom, provided by Magribe.

Magribe, an anagram for Gambier, first name: Michel, is the central character of “La Vache Brune”.  He has a grey 2 CV with an ashtray overflowing with cigarette butts and tobacco crumbs - he rolls his cigarettes and joints.  He is very helpful, practical, tends to want to improve everything that can be, stubborn, sometimes funny, sometimes not. We know when he is around because he always trails behind him heady smells of patchouli.

As a cook, Magribe’s specialty is brown rice with herbes de Provence.  We sometimes had trouble distinguishing the rice from the herbs.  It was, however, a change from our basic diet.  Breakfast: bread with hot milk; lunch: alternately, duck eggs (given by the neighboring farm) or oven-dried pork blood pancakes; evening: bread with hot milk.

Magribe had another recipe: a decoction of eucalyptus leaves. He and Daniel tried it one day. Two hours later I prevented Daniel from breaking out of the bedroom window. His strange behavior and hallucinations lasted two days!

Musically speaking, Magribe was our first and foremost fan. He invented a Leslie booth of sorts by turning a sheet of hardboard in front of my amp during our improvised concerts in the Pearl room, guaranteed to impress!

He would later buy me a nice classical guitar when Daniel and I began to seriously play violin / guitar duets.  Daniel and Magribe certainly never did things by halves.

Magribe would also be the one to organize a trip to Royan to attend a contemporary music festival.  The Royan municipal campsite in April turned out to be an exhausting experience.  On closing night, a real musical marathon, I fell asleep during the Fantastic Symphony, to wake up in the middle ages, courtesy of a motet by Guillaume de Machaut.
Respect, Magribe!

Living with Daniel at “La Vache Brune” was never difficult, we knew each other so well. Our two personalities generated no particular tension, we could each go about our business without necessarily informing the other.  Daniel could spend hours playing drums without my noticing, monopolized as I was by my own research. I was now writing my ideas in music booklets and he was blackening pages and pages with drum "patterns", in all sorts of unbelievable time, just in case they might be of use ... He also started learning the violin, in which circumstances ? I don’t remember. At first the violin’s screeching was hard to bear, but he quickly made progress - to the point that we could play duets. I started to create a small specific repertoire that was more or less like chamber music, I had listened to Debussy, Fauré, Ravel, Poulenc a lot, borrowing discs from my mom's discotheque.

With Daniel we did not talk much, there was no need, we had already said everything (well, everything that was tell-able).  From time to time one of us would have an "Anguish" attack, a kind of dizzy and deep questioning of the future to which we had no answer, not enough words for that, the complicated words, we did not want to use them, we could not use them, we were musicians after all, not novelists. Yet we read a lot. I had started my cycle of American literature, Dos Passos, Henri Miller, Jack Kerouac etc. in paperback, of course. Daniel was more into Caldwell and Steinbeck.

Whoever would go into "Anguish" remained prostrate in one of the DS seats for hours on end. It happened to us in turn. The other waited patiently for it to pass. It always passed.

Life flowed, free from the world at large.

From time to time, if we could, we went to the movies in Saint Lô.  Hitching a ride back was out of the question, no more cars at that hour, so:  a ten kilometer walk home.
I particularly remember when Stanley Kubrick's A Clockwork Orange came out.

The only thing I've ever (internally) blamed Daniel for is the fact that he always bought Klorane shampoo for his beautiful, long, curly hair, of which he took great care.  Even when we were flat broke, he’d go to the pharmacy just to buy this shampoo…


Our only real connection to the world was the records.  The sound track at ‘'La Vache Brune'' consisted of Weather Report I Sing The Body Electric, Miles Davis In A Silent Way/Bitches Brew/Live-Evil, Soft Machine 5 & 6, King Crimson Lizard and Mahavishnu Orchestra Inner Mounting Flame.

Listening to that last record brought on a deep depression. With McLaughlin setting the bar so high, why bother with the guitar?  I figured a change of instrument was the solution.

Hitch a ride to Rennes.
Purchase an oboe on credit.
Daddy, Mom as security.
Hitch a ride back to St Samson.

But switching from guitar to oboe was far from obvious. Yet I stood firm for four years.  At the very beginning, I even took a few lessons at the Saint Lô Conservatory.  The director played trombone and wrote the arrangements for Daniel's dance band...

Lapin also wanted to expand his musical abilities by learning another instrument, he thought it might better his chances of being engaged on a yearly basis by a casino orchestra.  Professionally, a casino orchestra was our Holy Grail.  At that level, one played the same venue every day, wicked!

He managed to unearth a xylophone, which would do until he found a vibraphone. In Granville, during my record buying spree, I had discovered Throb by Gary Burton, who quickly became one of my favorite musicians.  So what a godsend they were, Lapin and his xylophone!

So now I had the ideal lineup for my band: Daniel, Lapin, the saxophonist from Granville, a young bass player: Denis Lefranc (I don’t remember who recruited him) and myself. I managed to set up two or three rehearsals in the Pearl room.  The first song the band rehearsed already had a title: Luisances.  “Ssounded great”.

Magribe, having heard us, was one step ahead: he was already thinking transportation. One day he arrived with a Renault van.  It was never to leave the farm again, a rod having blown.  Pitifully, the van ended up as a makeshift toilet in the barn.

One day, we made a small career breakthrough.  A recording of three of our tracks, including the much-touted Calèche, made at Radio Cherbourg and highlighting our violin / guitar duet, reached the ears of a regional television programmer from Caen.  They had even decided to do a story on ''La Vache Brune'' for the regional news.

Before their coming, Daniel and I had some thorough housecleaning to do.  A lot of work, especially on top of the gaz oven, with the milk overflowing almost every day.

The TV car arrives, a female reporter in a sheepskin jacket and her cameraman step out.  Interview:  ''how do two young people etc..."  in local network style ;  record a track for background sound.  After the report’s airing, relations with my father improved.

At the beginning of 73, Daniel’s dance band dissolved, due to financial difficulties, endangering our fragile balance.  We needed to evolve.

Lapin had told us about the boss of a Rennes bistro, a former musician who played the role of poste restante.  He was the go-between for musicians and dance band managers.
A band from the Poitiers area was looking for a guitarist and a drummer.  The next week we left with Marie Christine, the sax’s former girlfriend, soon to become my wife, who owned a 2 CV 6 - en route for the south!  Neither Daniel nor I had learned to drive.